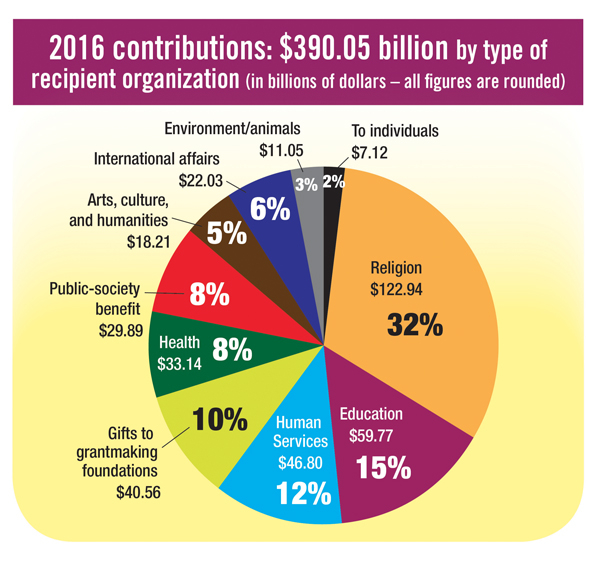 Giving in the United States set a record for the third consecutive year, topping $390 billion for 2016. Giving was up 2.7 percent and increases were reported in all major categories of nonprofits for only the sixth time in 40 years.

According to preliminary estimates released today in “Giving USA: The Annual Report on Philanthropy for the Year 2016,” giving increased 1.4 percent to $390.05 billion from the revised estimate of $379.89 billion for total giving in 2015 when 2015 was adjusted for inflation. Except for 2013, when giving was flat, charitable contributions have increased every year since 2010.

Initial estimates a year ago had giving pegged at $373.25 billion for 2015, up 4.1 percent compared to 2014. That total was revised to $379.89  billion and will be revised one more time, in next year’s report. Estimates for 2016 are in current dollars but data for every year prior are adjusted for inflation, which affects the percentage growth because that’s based on the difference between 2016 and 2015 giving, and 2015 giving is changed by the adjustment for inflation.

Charitable giving by individuals, foundations and corporations all increased last year while gifts from estates dropped significantly. Overall giving has remained above 2 percent of Gross Domestic Product (GDP) since 2012, including last year at 2.1 percent for the third consecutive year.

Giving USA is the longest-running and most comprehensive report of its kind, published by Giving USA Foundation, a public service initiative of The Giving Institute. It is researched and written by the Indiana University Lilly Family School of Philanthropy.

Aggregate giving to religion and education again were the two largest categories, combining for almost $183 billion, nearly 47 percent of the total. But for the first time in recent years, giving to education did not see the largest increase and giving to religion kept pace with other major categories after years of lagging behind. In 2014 and 2015, education giving grew by more than 8 percent.

Among recipients, giving during 2016 was led by environment and animal organizations:

Giving to individuals was down 2.5 percent (-3.7 percent adjusted for inflation) to $7.12 billion. The bulk of donations are in-kind gifts of medications to patients in need, made through Patient Assistance Programs (PAPs) of pharmaceutical companies’ operation foundations.

Unallocated giving – that which cannot be attributed to a particular subsector – was -$1.46 billion last year. Unallocated giving can be negative when the giving estimated by uses is greater than the giving estimated through sources. The annual report calculates total giving through two independent methods, one using source-level data and the other uses-level data. Total giving calculated from sources is used as the estimate for total giving because a greater amount of it comes from finalized tax data.

“Individual giving continued its remarkable role in American philanthropy in a year that included a turbulent election season that reflected a globally resurgent populism,” said Amir Pasic, Ph.D., the Eugene R. Tempel Dean of the Lilly Family School of Philanthropy. “In this context, the absence of a dramatic change in giving is perhaps remarkable but it also demonstrates the need for us to better understand the multitude of individual and collective decisions that comprise our record of national giving,” he said.

Research by the Lilly Family School of Philanthropy and other researchers has long demonstrated that aggregate giving trends are influenced by large-scale economic factors. Helping to increase giving by individuals and households was that both personal consumption and disposable personal income grew by almost 4 percent over 2015. The S&P 500 finished the year up 9.5 percent after uneven performance for much of 2015 and a mixed economic picture in 2015.

Giving by foundations and by corporations both increased by 3.5 percent. Foundations giving totaled an estimated $59.28 billion, an increase of 2.2 percent, adjusted for inflation. Giving by corporations totaled $18.55 billion, up 2.3 percent when inflation is taken into account.

The only source of giving that was down in 2016 was giving by bequests, which dropped about 9 percent, or 10.1 percent adjusted for inflation, to $30.36 billion.

After several years of mega-gifts arguably propping up philanthropy to some extent, or at least grabbing the headlines, individual giving might be taking back the spotlight.

“In 2016, we saw something of a democratization of philanthropy,” said Patrick Rooney, Ph.D., associate dean for academic affairs and research at the Lilly Family School of Philanthropy. “The strong growth in individual giving may be less attributable to the large gifts, which were not as robust as we have seen in some prior years, suggesting that more of that growth in 2016 may have come from giving by donors among the general population compared to recent years,” he said.

Higher education typically has been the beneficiary of mega-gifts in recent years but the education category saw relatively slower growth compared to most post-recession years.

“While giving to arts, health and the environment experienced significant growth, giving to education saw relatively slower growth,” said Una Osili, Ph.D., director of research at the Indiana University Lilly Family School of Philanthropy. “In most years, giving to education, arts and culture, and health organizations often experience similar changes in growth rates, but in 2016, arts and health giving are both notably higher than giving to education,” she said. Giving to international affairs also saw growth even though there were lower levels of giving for disaster relief, she added.